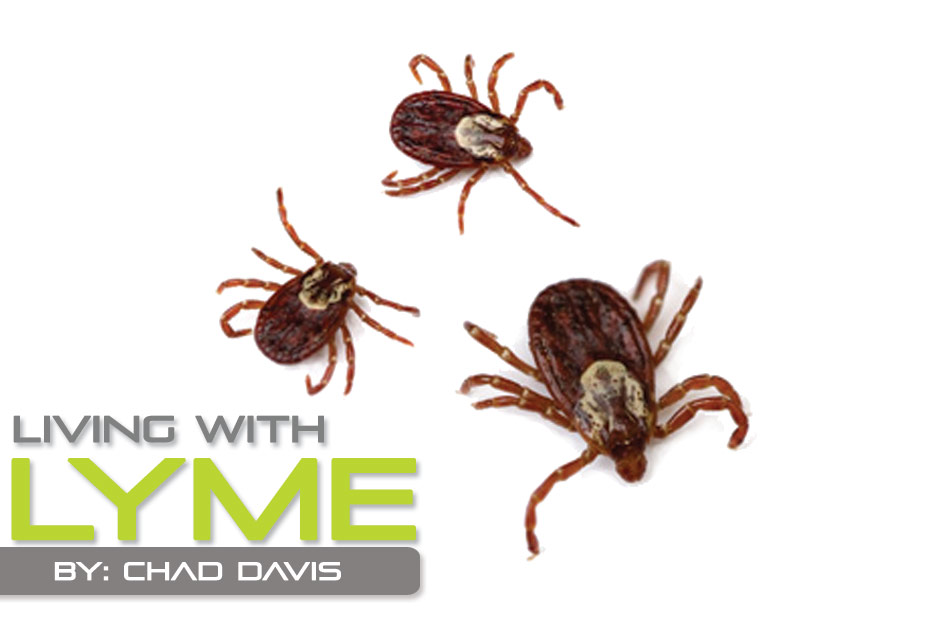 It was September of 2014, everything was going great! My trail cameras were providing some pictures of beautiful mature bucks, which made hitting the stands in the scorching heat much easier. It was also great that I took my biggest buck to date that early September season. The only problem was the tiny little pest that would eventually change my life. It isn’t that I didn’t prepare and take extra precautions. I sprayed all my garments with the best in scent free tick repellent and wore the best in insect proof under garments. I preached it to my friends, and still do today. Go the extra mile in protecting yourself against Lyme spreading ticks. Lyme is no joking matter. Unfortunately, my tick attachment was most likely due to one that had gotten on my garment or backpack and later found its way to me while I was sleeping or just sitting in my hotel room. By the time I found the tick, which I suspect was the culprit; it was 36-48hrs after the initial attachment. I remember pulling the tiny thing off and just hoping that it wasn’t a carrier.

I felt great up until about 18-21 days later after getting back from a hunting trip. I then started running extreme fevers which did not want to go away. That was followed by having no energy whatsoever. Taking a simple shower was draining. I also have been in fitness for 25 years and have been in pretty good shape, yet it seemed that a simple warm-up set of curls would take every ounce of energy and wind out of my body. You know, I never saw the bull’s eye rash and later found out that the rash often times might not be a symptom on some. I went to the walk-in clinic and, for some reason, was treated for a prostate infection…even after I insisted that I did not have that type of symptoms. After 14 days of a strong antibiotic, I wasn’t getting any better. I was actually getting worse and could barely make it through a work day. I would just come home and go to sleep. I also felt extremely depressed for strange reasons and was very lethargic. After 14 days on the antibiotics, I decided I had to visit my primary care physician and requested testing for Lyme. By then, I had a gut feeling that I either had Lyme or cancer. Well, two days later I got the call. I did indeed have Lyme.

I was immediately given a prescription for Doxycycline. I must say that within 10 days on that stuff I felt like a new man! Now, I still was not anywhere close to 100%. To this day I can only do about 75 to 80% of what I could previously do pre-Lyme in the gym. Actually, my lack of wind and high heart rate while training lead me to the cardiologist. I am now on heart medication, and I never had that issue before contracting Lyme. I also now have trouble with my speech from time to time. I know what I want to say, yet I have sometimes have a hard time getting it out. I hear that is common with Lyme due to it attacking the brain and nervous system. I have had back pain for the last four years. However, it has worsened significantly since I contracted Lyme. I feel that I have to do all I can to stay away from some form of anti-inflammatory medication. The joint pain comes and goes with the back pain. Again, all are symptoms of Lyme. Also, I am not sure if it is Lyme related, but I tore my calf badly simply by doing a fast paced walk back to a booth and a trade show in January. My whole bottom leg turned black and stayed that way for weeks. I am not sure why else it would have torn so easily, but maybe that was just coincidental.

Living with Lyme has been a major life changer for me. I am very fortunate that I caught it when I did. So many others aren’t so lucky and have major chronic Lyme related issues much more serious than mine. I would warn all of you to go the extra mile in protecting yourself against ticks if you are getting out in the outdoors in the early summer and spring months. I don’t have any connections with these companies, but my go-to spray is Sawyers Permethrin Premium Insect Repellent Spray and my super lightweight and breathable under garment made by Rynoskin. The Rynoskin pants and top are an ABSOLUTE MUST in my book. Cabela’s also offers Bug-Skinz which are awesome. They both fit like thermal underwear, yet are extremely lightweight, breathable, and perfect for the hot weather conditions. I guess I now own four pairs of the tops and bottoms and never get in the woods without them.

Now, even when wearing the protective sprays and garments, ALWAYS double check yourself for ticks. I mean check every nook, cranny and crevice. They can do just what mine did and crawl from a pile of hunting gear and onto your body from simply being on floor nearby. Finally, BE SURE to check your kids and spouse often after your hunts…even if they did not go with you. Lyme can be deadly to anyone, and if doctors don’t have reason to believe it isn’t Lyme by someone who does not get outdoors, it could be too late by the time the come to that conclusion and begin treatment.